Character Info
Name: Auron
Age: 120+
Alignment: CN
Race: Flame Malak
Gender: Male
Class: Illusionist
Silver: 32
View User's Profile
After what might have been days or hours, he came to in a dimly lit room. It was chilly, and for some reason his muscles ached all over. Groaning, he went to rub his eyes only to find they couldn't move. Looking down, he saw his wrists were manacled to the chair he was sitting in. A bright light came on and he winced–squeezing his eyes shut. There were footsteps, slow and deliberate coming closer. The echo of heels on stone clacked as the initial brightness became tolerable. Opening his eyes slowly, he saw he was in a small room with no windows and one door. The door was across from him, and he was seated in one of the two chairs placed around a table. But what made his blood run cold, was the familiar glint coming from something on the table. The ring was there. Now he knew why he had woken up.

"Mister Auron, I presume? I believe that is your true name, isn't it?" An almost emotionless voice broke the silence as his attention was brought to the person sitting before him. The back of his neck began to break out in a cold sweat when he saw their face. It was that woman he had spoken with earlier before he blacked out. It was unnervingly quiet, and the only sounds he could hear were her voice and his own breathing. This wasn't Sidhiel, or at least any place in Sidhiel he knew about. "How…" His voice croaked, only for the brunette woman to cut him off. "Don't be surprised. You're the one who told me. Just like how you told me you were planning to first rob me blind, then delude me into signing away my financial assets." A prickling sensation began creeping up his back as he was starting to take in the full scope of just how deep he had dug his own grave. She probably figured out what the real enchantment on that ring was, and while he wasn't in his right mind who knows how much information she had wrung from him. The fact he didn't know how much she knew about him was as terrifying as death itself. He didn't have a single recollection of what he had said or done under the ring's influence.

"You know, there are two types of people I hate the most. The first are thieving liars, and the second are those who make promises they don't intend to keep." She stared back at him with those eyes that could see through your soul, disturbingly calm and unreadable. There wasn't any pride, anger, or self-satisfaction. It was like staring into a void, knowing that something incomprehensible was looking back. He was too scared to try manipulating his captor's emotions towards an escape. He couldn't understand her at all. The tension was broken by her pulling out a rolled piece of parchment. The sound of unfolding paper was magnified in this empty and stark chamber. Pulling out a quill and inkwell, she dipped the tip in and pushed it towards him with the unfurled document. Immediately he knew it was a contract. For the most part it was written in another's hand, detailing terms and specifics that he couldn't focus on at the moment. He was too busy noticing the parts that were written in his own handwriting, likely done when he wasn't lucid.

The only part left blank was at the bottom to sign the agreement. All of his personal details were present, even things he'd never tell under the threat of death. There weren't any loopholes, she'd taken everything into account beforehand. Taking the engraved ring, she fiddled with it as he read the contract. "For trying to scam me out of everything I worked so hard to build, I believe it's only fair that I demand compensation for that potential loss. After running a rough estimate on the approximate value of my business if your plan had succeeded, I've rounded the amount to the nearest multiple of five." Scanning the inked words for the mentioned figure, Auron's eyes widened as he saw how many numbers trailed behind the first one. "It's a good thing that infernal beings can live for a long time…that means I don't have to worry about you kicking the bucket before you pay me back. But don't get any funny ideas, alright?" She quipped, her poker face briefly changing into a wry smile. 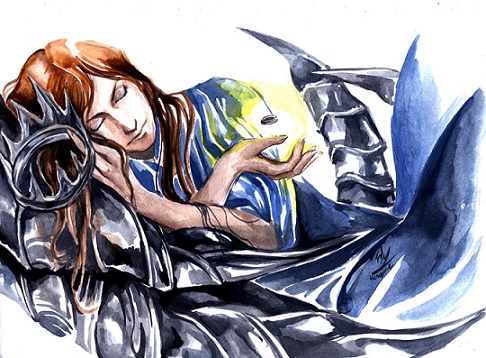 'First comes the blessing of all that you've dreamed–but then comes the curses of diamonds and rings…'
Shiloh Kyrie
Sun Mar 4, 2018 7:46 PM Post Subject: An Offer You Can't Refuse [P]

Deity
Administrator
Character Info
Name: Shiloh Kyrie
Age: Appears 20
Alignment: LN
Race: Deity (Fae-touched Human)
Gender: Female
Class: Rogue
Silver: 13437
View User's Profile
He looked confused when she gave him the quill and contract. When he finally found his voice, he was hesitant to sign. "Something wrong? Did I miss something?" Shiloh asked, leaning forward on her elbow. "Why do I need to sign this? You could have made me sign it when you were asking for my information." Putting down the ring on the table and pushing it two inches up, she answered plainly. "There's no point if you don't sign it out of your own free will. If I wanted to force you, I could have just forged a signature. I want you to be fully aware of the terms before finalizing the agreement. That way, in the future there won't be any dispute on what happened here." Claiming a person didn't do something when they were fully conscious or coherent was a common tactic unscrupulous folk would use to weasel their way out of taking responsibility. Thus, she wanted things done this way to ensure everything was fair. In the end, it was his choice. No matter how he could try to explain, he had no excuse to say he wasn't fully in control of his actions. It was the best guarantee between contractor and signer.

"Look, if you're not willing to sign I can wait as long as you want. It's not like you're signing away your soul to the Reaper or anything. All I want…is for you to work for me until you pay your debt back. There's no rush–you'll have all the time you'll need to clear it. And once your debt is paid in full, you can go scot-free. But of course the sooner you pay it off the quicker you'll be free of your obligations, so keep that in mind." When she had brought the unconscious man on deck, she witnessed his appearance undergo a change. Instead of a blond elf, there was a man with ruddy red hair in the same clothes. It was then she realized he had been using magic as a disguise, and put on a pair of special magic-inhibiting shackles as a precaution. They were the same ones still on him now, keeping him from trying to break free and run. When the man came to, he appeared to be in a daze. Demanding an explanation, he immediately spilled everything–going into great detail on how he had planned to swindle her out of her property and money. It was then she looked upon that ring with suspicion, and decided to test the effects a little more. After obtaining his name, occupation, and other personal details of interest she came to confirm that this was a mind-altering enchantment. And good thing she had been paranoid enough to avoid it; or else he could have gotten away with it too.

Her curiosity satisfied, she chained him to a chair in Antikythera and took the ring off. In the span of time it took for him to regain his original state of mind, she had written up a fresh contract document specifically tailored to the circumstances. Finally, he took the quill and began to write. When it was complete, the parchment began to glow and curl up. Sealing itself, the symbol of the Machinarium blazed onto the paper before she pocketed it. Rising from her seat, she unlocked the shackles and sent them away. No longer restrained, he was ready to head for the door behind her. "One more thing…" She spoke, loudly and firmly. " Before I receive your debt's payment, I'll be taking something as collateral." Initiating stasis, the man found himself momentarily paralyzed. From his eyes she could see he was resisting, but it was useless.

Walking towards him, she stared him down as her voice resonated in the bright chamber. "Foul is foul, fair is fair. You aimed to steal what was not yours, so in exchange I will seize what you treasure the most. Like a thief in the night, like an unforeseen disaster–I will swallow up everything you hold dear. There's nowhere to run, nowhere to hide. Your days of wanton indulgence and luxury are over. Did you really think you could get away with your ill-gotten gains, earned through sweet lies and trickery? I am the Ruler of Onslaught and the God of Misfortune–I will steal your heart, and plunge you into misery!"

Grasping him by the collar, she held him at an arm's length as a symbol began to burn itself into his skin. The mark of Antikythera appeared, forming on the left side of his chest right over his heart. With stasis undone, the thieving fiend was convulsing as the finalization of the contract was complete.
"When all else fails, move on to plan B. And when that plan fails, move on to the next plan."
Looking for alchemy or synth items? I might have what you need: Synth and Alchemy Surplus
Extra event synths here: Event Synth Clearance Sale
Shiloh is the Ruler of Onslaught and the Thundering Tempest, or the Overseer of Luck and Misfortune

Her God Powers are:
I. She can utilize spatial distortion to redirect attacks aimed at her to target something else.
II. She can create a paralyzing stasis field with a diameter of 30 ft on a person or a fixed point within her line of sight.
III. She is able to reverse the polarity of one's misfortune into fortune, or vice versa.
Reply